On Friday 13th December 1974, the Dracula Society met at the Royal Hotel at Purfleet in Essex for the very first Society dinner.

This dinner was held at a hotel which would most likely have been known to and visited by Bram Stoker if he was in the area, as in his time it was a well known haunt of well-to-do visitors from London. It was also known then for its whitebait suppers!

Stoker almost certainly did at least know the area, as in Dracula he sited in the Purfleet area Carfax (the house purchased by Count Dracula through Jonathan Harker when in Transylvania), and also Dr. Seward's nearby asylum.

Present at this first dinner was the then Society member actor Murray Brown, who had been declared as the very first Society award winner, for "Most Promising Actor of the Year".

This was for his performance as Jonathan Harker in the 1974 film production of Dracula, directed by Dan Curtis and starring Jack Palance in the title role.

Murray wasn't actually presented with his framed award citation on the night as it wasn't yet ready, and he was instead presented with a bottle of champagne!

He was finally presented with the actual award in the following June, and it was presented to him by his fellow actor, and also then fellow Society member, Vincent Price! 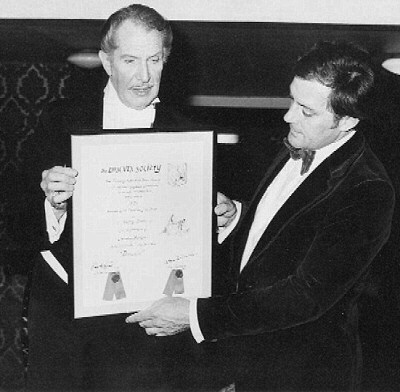 It was not until the following year in 1975 that it was decided that a dinner should become an annual event, and that we should hold a Society Annual Dinner to honour the birthday of Bram Stoker, which falls on November 8th.

These dinners were to be called Bram Stoker Birthday Dinners, and they have been held in one form or another every year since, on the closest Saturday to Stoker's birth date.

The Dinner is the Dracula Society's "big night of the year".

It's the most attended regular Society event, and for many years the Annual Dinners were held in the formal dining suites of central London hotels. When this eventually became prohibitively expensive, we moved for a couple of years to just having an informal wine bar event to mark Stoker's birthday, but thankfully we soon found that we were able to have seated meals once again, in privately hired restaurants, clubs or bars.

One of the main functions of the Dinner is to present our Society awards, and we always endeavour to present the awards to our winners in person actually at the event.

This is sometimes not possible of course, especially if the award winners are not United Kingdom residents, and in that case we try to find someone appropriate to accept the awards on their behalf.

We also aspire to have at least one other Society guest at our Dinners, someone who is prominent in the Gothic genre field, either as a performer, producer, director, or writer.

Here below for interest is a list of the Society Dinners to date, with the guests present, either as award winners or as Society guests, and the venue at which the Dinner was held.

Also here is a selection of the ornate menu cards designed for the very early Dinners by Society co-founder Bruce Wightman.

The numbering of the "Bram Stoker Birthday Dinners" does not include the 1974 dinner, which was not advertised as such.

(This was the Society's 10th Anniversary celebration)

The Cittie of Yorke public house

(There were no awards to be presented that year)

(This was the Society's Dracula centenary celebration)

The Royal Victoria and Bull Hotel at Rochester in Kent

(The only Stoker Birthday Dinner held outside London)

Bernard Davies (our retired co-founder was our Guest of Honour)

The George in the Strand public house